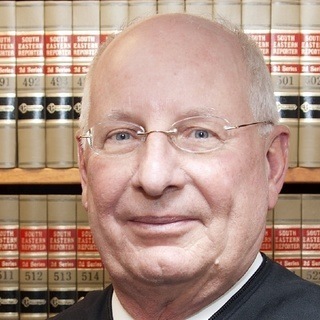 Justice Paul E. Pfeifer grew up on his family's dairy farm near Bucyrus. He still resides just down the road. As a teenager, he raised purebred Yorkshire hogs to finance his college education. Those years taught him the value of hard work, determination and clean overalls.

Justice Pfeifer's first job after graduating from OSU's law school was as an assistant attorney general trying eminent-domain cases associated with the building of Ohio's highway system. Traveling the state gave him an appreciation for Ohio's county courthouses, architectural jewels that are the crossroads of life in our towns and cities. He always tries to keep in mind how the Supreme Court's decisions might affect the people seeking justice in county courthouses every day.

In 1972, he became a partner in the law firm of Cory, Brown & Pfeifer, where he practiced — primarily as a trial and tax lawyer — for 20 years. He also served several years as an assistant county prosecutor.

Justice Pfeifer served in both houses of the Ohio General Assembly, including one term in the House of Representatives and four terms in the Senate. He held a variety of leadership posts in the Senate, and served as chairman of the Senate Judiciary Committee for 10 years. His proudest legislative accomplishment was crafting the legislation creating the Ohio Tuition Trust Authority.

Justice Pfeifer was first elected to the Supreme Court in 1992. For him, the most inspiring thing about the Court is that every voice gets heard, from that of the widow fighting for her husband's workers' compensation benefits, to those of corporations battling over tens of millions of dollars.

He was sworn in to his fourth Supreme Court term in January 2011. At Justice Pfeifer's side was his wife, Julie, whom he first met when their steers were tied across from each other at the Crawford County Fair "more years ago than it would be polite to mention."