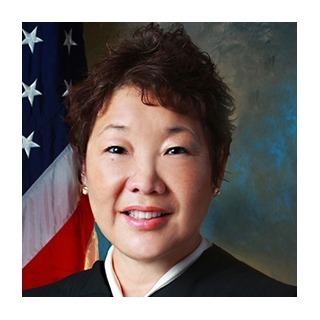 The Honorable Leslie E. Kobayashi was nominated by President Barack Obama on April 21, 2010 and confirmed by the United States Senate as a United States District Judge in the District of Hawai`i on December 22, 2010.
Prior to confirmation, Judge Kobayashi served as a United States Magistrate Judge (1999-2010) in the District of Hawai`i. She was a practicing lawyer for 16 years, first serving as a deputy prosecuting attorney for the City and County of Honolulu (1983-1984), and then in private practice where she was a trial attorney and a managing partner (1984-1999), handling a variety of matters including personal injury, business disputes, labor and employment, medical and legal malpractice, and products liability. She received her B.A. degree from Wellesley College (1979) and her J.D. degree from Boston College School of Law (1983).
Judge Kobayashi currently serves on the Ninth Circuit Alternative Dispute Resolution Committee. She has served on other committees, including the Ninth Circuit Conference Executive Planning Committee, Magistrate Judges’ Executive Board for the Ninth Circuit, sub- committees for the Hawai`i Chapter for the American Judicature Society, and as a Bencher for the American Inns of Court, Aloha Inn. From 2000-2002, she was an adjunct professor at the William S. Richardson School of Law and was the co-recipient of the Outstanding Adjunct Professor Award in 2002. She is the recipient of the 2011 Outstanding Judicial Achievement Award from the Hawai`i Women Lawyers. From 2010-2011, she was the presiding judge of the pilot program for the District of Hawaii’s Reentry Court.