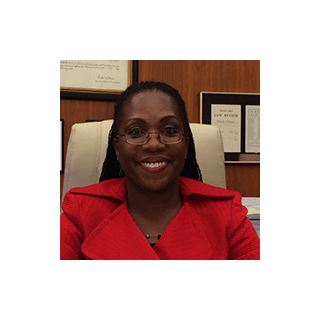 Judge Ketanji Brown Jackson received her commission as a United States District Judge in March 2013. Until December of 2014, she also served as a Vice Chair and Commissioner on the United States Sentencing Commission.

Prior to her service on the Commission, Judge Jackson worked for three years as Of Counsel at Morrison & Foerster LLP, with a practice that focused on criminal and civil appellate litigation in both state and federal courts, as well as cases in the Supreme Court of the United States. From 2005 until 2007, prior to joining Morrison & Foerster LLP, Judge Jackson served as an assistant federal public defender in the Appeals Division of the Office of the Federal Public Defender in the District of Columbia. Before that appointment, Judge Jackson worked as an assistant special counsel at the United States Sentencing Commission and as an associate with two law firms, one specializing in white-collar criminal defense, the other focusing on the negotiated settlement of mass-tort claims. She also served as a law clerk to three federal judges: Associate Justice Stephen G. Breyer of the Supreme Court of the United States (October Term 1999), Judge Bruce M. Selya of the U.S. Court of Appeals for the First Circuit (1997-1998), and Judge Patti B. Saris of the U.S. District Court for the District of Massachusetts (1996-1997).

Judge
U.S. District Court for the District of Columbia
2013 - Current