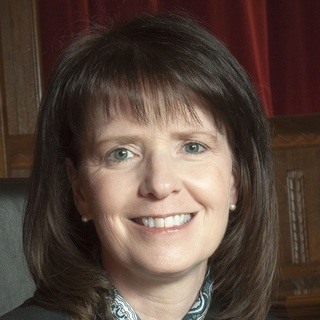 Judi French became a justice of the Supreme Court of Ohio in January 2013 and was elected to her first full term on November 4, 2014. She has traveled throughout Ohio, visiting all 88 counties in each of her two years on the bench. With a history of public service and special interest in civic education, Justice French is committed to serving as a resource for the people of Ohio.
A History of Public Service
For the past two decades, Justice French has dedicated her career to public service. In that time, she has served the State of Ohio as a lawyer for a state agency, an assistant attorney general, counsel to the Governor, and, finally, as a judge.
In 1993, she joined the Ohio Environmental Protection Agency as deputy director for legal affairs. From 1997 to 2002, she worked for Attorney General Betty Montgomery as an assistant attorney general, and later as chief counsel.
During her time in the Attorney General’s Office, Justice French argued two cases before the United States Supreme Court. One of those cases was the Cleveland School Vouchers case, in which she served as lead counsel. Her successful presentation of the state’s position helped ensure equitable educational opportunities for every Ohio student.
From 2002 to 2004, Justice French served as chief legal counsel to Governor Bob Taft. In that role, she served as the chair of the Sex Offender Registration and Notification Task Force, which made recommendations to the legislature for making Ohio’s sex-offender laws more effective.
In 2004, Justice French was elected as a judge on the Tenth District Court of Appeals, which hears appeals from Franklin County courts and state administrative agencies. While a judge on the court of appeals for eight years, she authored more than 800 legal opinions.
In December 2012, Governor John Kasich appointed Justice French to fill a vacancy on the Supreme Court of Ohio. She became the 155th justice of the Ohio Supreme Court on January 1, 2013.