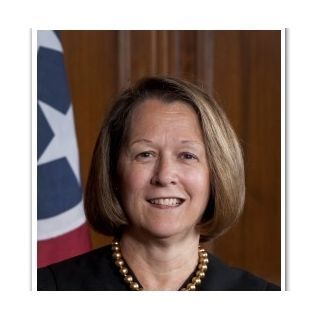 Cornelia A. (Connie) Clark was appointed to the Tennessee Supreme Court in September 2005 and was elected to a full eight-year term in August 2006. On September 1, 2010, she was sworn in as chief justice, becoming the second woman in Tennessee history to serve in that role.

Prior to her appointment to the Supreme Court, Justice Clark served as director of the Administrative Office of the Courts for six years. Clark was appointed circuit court judge of the 21st Judicial District in October 1989 after practicing law for 10 years at Farris, Warfield & Kanaday, now Stites & Harbison. She was elected to a full eight-year term in 1990, and was re-elected in 1998.

In 2010, Clark was inducted into the Nashville YWCA’s Academy for Women of Achievement and was also named Appellate Judge of the Year by the Southeastern Chapters of the American Board of Trial Advocates. In 2005, Clark received the Williamson County Bar Association’s inaugural Liberty Bell Award for promoting a better understanding for the rule of law and encouraging civic responsibility.

Clark is a native of Franklin, where her family has lived for eight generations. An active member of the community, Clark served as Franklin City Attorney and as a board member of the Williamson County-Franklin Chamber of Commerce. Clark is a life-long member of First United Methodist Church in Franklin, where she has previously served on the Board of Trustees and as chair of the Administrative Board and the Site Selection and Building Committee.

Tennessee
Board of Professional Responsibility of the Supreme Court of Tennessee
ID Number: 006662

Conference of State Court Administrators
Board of Directors
2004 - 2005